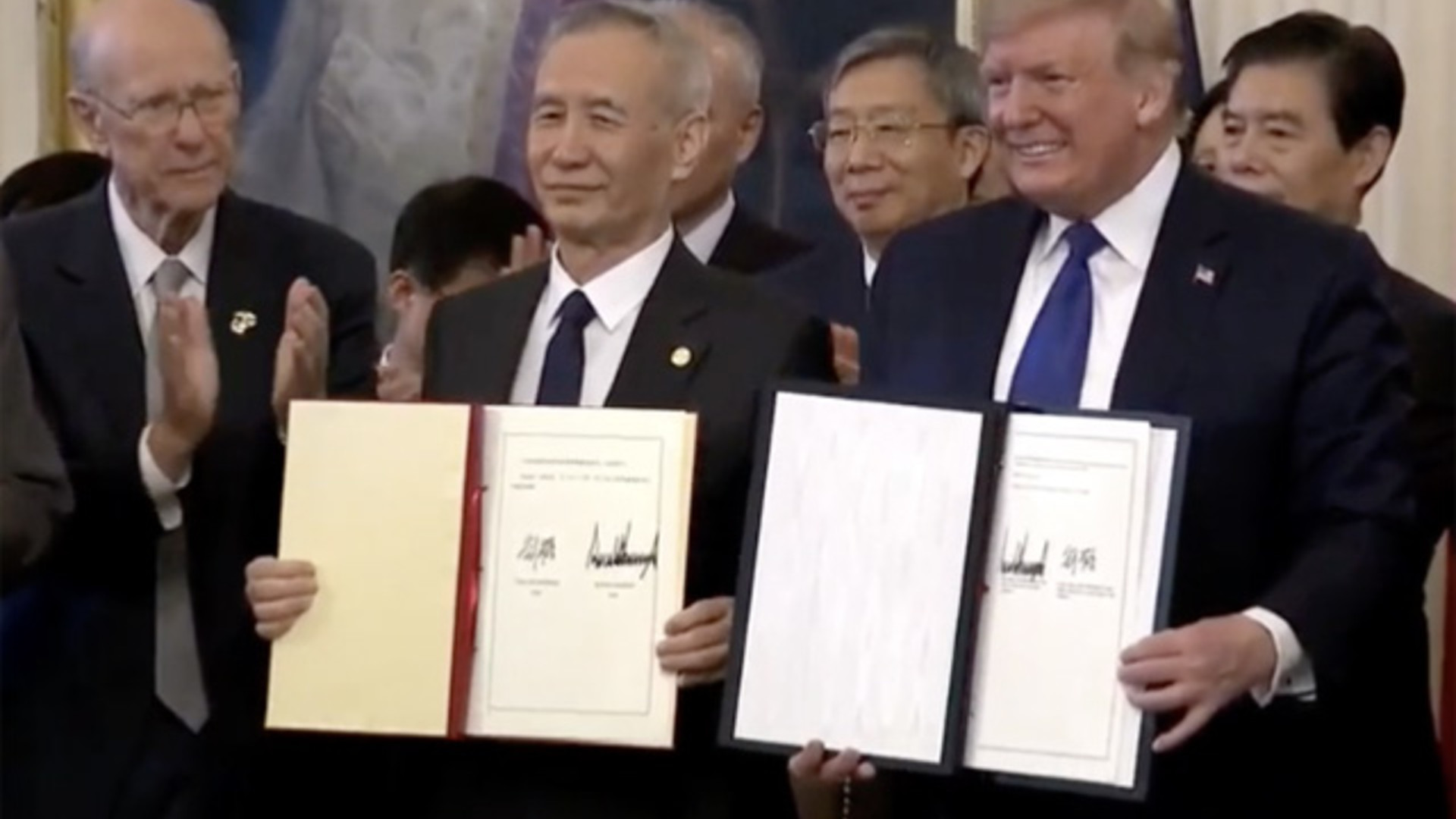 In one of the biggest political victories of his presidency, President Donald Trump on Wednesday signed a phase-one deal with China that is expected to drive significantly higher agricultural exports to that country.

The president held a signing event Wednesday with Chinese Vice Premier Liu He in which Trump highlighted reasons he pushed for a tougher policy stance with China. Trump said the U.S. in recent decades had driven up trillions in trade deficits, and that helped motivate Trump to run for president.

"China fully understands there has to be a certain reciprocity. There has to be. It can't continue like this," Trump said. He later added, "This is an unbelievable deal for both countries, and hopefully it can lead to a more stable world and peace."

Under the deal, agricultural sales to China could reach $50 billion a year, the president said. Still, Trump's team stated China agreed to $40 billion in agricultural purchases for each of the next two years. Trump said the initial talks called for $20 billion in ag sales, but he demanded that be more than doubled, even though his trade negotiators did not think farmers could meet that demand volume.

"I said 'I love our farmers. Let them tell me they can't do it.' I said. 'Tell them to go out and buy a larger tractor. Buy a little more land.' But I have no doubt they will be able to do it," Trump said at the signing ceremony.

Agricultural exports to China reached $23.8 billion in 2017, making it the largest U.S. export market, especially for soybeans. Sales fell to $9.3 billion overall in 2018 as the trade dispute heated up. Ag sales picked up in 2019, but official totals for last year have not been released.

Zippy Duvall, president of the American Farm Bureau Federation, said the signing of the deal "is an important step in giving America's farmers and ranchers the ability to get back to business in the global market." Duvall added that China had fallen from the top export market to No. 5 in just the past 18 months since tariffs went into effect.

"This agreement will help turn around two years of declining agricultural exports," Duvall said. "The potential of tens of billions more in exports is welcome news for farmers who are eager to compete on a more level playing field."

The National Pork Producers Council, which has seen pork exports to China grow because of African swine fever, also applauded the deal. NPPC noted China is the largest consumer and producer of pork but has been ravaged by ASF. While pork sales have grown, a 60% punitive tariff has still stymied even higher potential pork sales to China. Dropping those tariffs would be a significant sign that China is serious about the trade deal, said David Herring, president of NPPC and a hog farmer from North Carolina.

"Pork is a litmus test for the phase-one deal with China," Herring said. "The worst-kept secret in the world is China's serious shortage of pork and rampant food price inflation. If China is unwilling to drop its tariffs on U.S. pork, it's difficult to envision the country meeting the $40-billion-per-year agriculture purchase commitment."

"China does have significant enforceable commitments to increase its purchases in all of these areas ... in significant amounts," a senior White House official said. "China will have to determine how it's going to make that happen and ensure nothing, either in the form of tariffs or non-tariff barriers, prevents them from doing that because they are all enforceable commitments."

In a statement, the White House called it an "historic agreement" that includes commitments by China to make reforms in areas such as intellectual property protection and enforcement, ending forced technology transfers and ending currency manipulation. At the same time, the U.S. will leave 7.5% tariffs on $300 billion in Chinese products and 25% on another $250 billion in Chinese goods.

"I'm leaving them on, otherwise we have no other cards to negotiate with," Trump said.

Speaking on CNBC early Wednesday, Treasury Secretary Steve Mnuchin stressed there was no agreement with China over future tariff reductions. Any tariff reductions would come from further trade talks, he said.

"This gives China a big incentive to get back to the table and agree to the additional issues that are still unresolved," Mnuchin said on CNBC.

In introducing guests during the signing ceremony, Trump pointed to every member of his cabinet that was there as well as Republican lawmakers. Trump credited Agriculture Secretary Sonny Perdue's knowledge of farming. Perdue has overseen the Market Facilitation Program, which has paid roughly $19.4 billion since 2018 to farmers to offset trade losses. The 2018 program paid more than $8.59 billion, while the 2019 program so far has paid $10.8 billion directly to farmers.

"Sonny Perdue has been incredible, and we're taking care of our farmers, I can tell you," Trump said.

Perdue also will have to address how USDA will handle the third tranche of Market Facilitation Program payments to farmers and whether there would be a third year of MFP payments after that.

Corn, rice and wheat exports could grow under a provision in the agreement that requires China to ensure a quota volume of those grains are imported under low tariffs -- known as a tariff rate quota. The deal requires China to conform to the World Trade Organization panel report last year that cited China had not met its import quotas for those grains. The U.S. had sued China in the WTO over its lack of corn, rice and wheat imports and the $100 billion in subsidies China was paying its farmers to grow those crops.

For biotechnology, China will significantly reduce its time to review U.S.-approved biotechnology traits to no more than 24 months. That is a major shift after China has taken several years in the past to approve biotech traits and stalled commercialization of those crops in the process. This situation led to a drop in the corn market and litigation against Syngenta when the company released its trait known as MIR 162. Syngenta had released the trait in 2011, expecting China approval that did not come. China then began rejecting U.S. corn shipments but finally approved MIR 162 in December 2014 after nearly four years of review.

The agreement details that the Food and Drug Administration will work to see if the U.S. can remove a ban against the import of Chinese dairy products and infant formula. The U.S. banned those products after a scandal in China found companies were adding industrial chemicals, notably melamine, to dairy products and baby formulas. China, in return, is allowing both fortified and ultrafiltered milk to be imported from the U.S.

China will continue to be allowed to audit the U.S. meat and poultry food-safety system and inspect facilities. China will not require on-site audits or inspections to register operations exporting distillers dried grains and distillers dried grains with solubles. When a manufacturer of these products requests to export, China will have three months to approve the application. China also will not require special protocols for the import of feed additives and compound feed products.