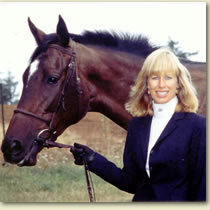 Reporting on ranching and land stewardship issues is a natural fit and a passion for Susan Allen. Growing up in a family that raised timber and Christmas trees under the shadow of Mt, Hood Susan has always found herself more comfortable on the back of a horse in the wilderness checking out the terrain than in any urban setting . Today herself a rancher and a member of the Oregon Cattlemen’s Association, Susan and her husband run their Wagu/Corrientee herd along with her son’s Angus cattle in the Blue Mts near Pendleton Oregon. There they have experienced first hand what it means to “ranch with wolves” in the most liberal and environmentally conscientious state in the Union. In her “free time” she enjoys working with young or difficult horses, helping them realize their potential and gifts in the ranching world.
Since graduating from Arizona State with a minor in Journalism Susan has followed a communications path that has included writing for and promoting the Northern California Thoroughbred Racing Industry to launching the popular Food Forethought Commentary and news paper column in the early 2000’s( as a result of the BSE finding in Mapton WA,) becoming one of the earliest advocates for agriculture. She also co- hosted the American Rancher Radio Program which eventually became Open Range for many years. She is excited to be “back in the saddle” each day covering the issues and accomplishments of America’s Ranching Community.

Farm and Ranch Report
It's been a heartbreaking winter for our family, like so many other ranchers we have fought in vain to save calves suffering from cold and illnesses like scours. I thought I would check in with aginfo reporter Bob Larson, on what FSA programs are available to help producers suffering weather loses.

Determining The Value of Herbicides

Farm and Ranch Report
It's a good time for growers to look back at their records for 2018 and see if their herbicides were the best value for their dollars.

Farm and Ranch Report
Earlier this month farmers had a chance to voice their concerns regarding changes to the Waters of the U.S. Rule. The EPA held a public hearing in Kansas City, Kansas, to gather input on the new WOTUS proposal.

bridge the communication gap between farm and fork.

Farm and Ranch Report
On Wednesday Acting U.S. Interior Secretary David Bernhardt announced that the nation's population of gray wolves has fully recovered across the lower 48 states and no longer needs federal protection

Tick Season will be here before you know it

Fruit Bites
The Court's reversal order not only reinstates the water right transfer previously approved by the Franklin County Water Conservancy Board, but in doing so prevents Ecology from usurping water law provisions protecting the water right from relinquishment.

Farm and Ranch Report
The Canadian Wheat Board had been in place since the 1930's with farmers required to sell wheat through the board since WWII.

Land & Livestock Report
Two major priorities of R-CALF for the new North American Free Trade Agreement includes reinstatement of Country of Origin Labeling as well as a change in the rule of origin in the agreement.

Land & Livestock Report
I recently spent time with the Maasai tribe in Kenya and was amazed at how even a 5-year-old child moved cattle in a low-stress manner.

Land & Livestock Report
The Swine Health Information Center has funded a near real-time monitoring system for swine diseases around the world.

Land & Livestock Report
We face plenty of headwinds these days this is just one deal we don't want to have to contend with at this point and time. This is encouraging news that this contract is solidified.

Land & Livestock Report
The disease that most livestock industry people would come up with that's most feared here or across the globe is foot and mouth disease.

Land & Livestock Report
The deadline to submit comments in support of EPA ditching the 2015 WOTUS rule. has been extended until September 27.

Land & Livestock Report
Somebody buys a steak from one of my animals and they go home and eat it they are not going to bring that steak back like they do if they get a defect in a refrigerator or tire or something else that they buy. They just don't come back and buy another steak for a while.

Land & Livestock Report
The Deadline for comments about the Waters of the US rule and repealing it is right around the corner, next Monday.

Land & Livestock Report
The UK remains the largest importer of U.S. wood pellets, purchasing 80% of U.S. exports through May 2017.